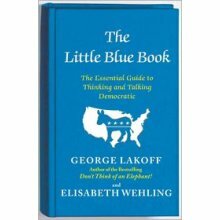 “Traditional American democracy has brought beauty to the world.  The idea of citizens caring about each other and taking responsibility not only for themselves but also for their fellow citizens has a moral beauty.  The mission of government is to protect and empower all equally through the use of the public realm, defined as resources for the betterment of life provided by all. That is also beautiful. It has made for civilized and humane private lives and prosperous private enterprise”.

That paragraph opens the sixth chapter of The Little Blue Book by George Lakoff and Elisabeth Wehling.  But while the book is touted as a guide to thinking and talking Democratic it is more of an explanation of how people can persuade and influence others by understanding the theory of the mind.  While the emphasis is on empathy and caring for others the Lakoff and Wheling stress the need for doing it from a moral perspective.  In other words, it needs to be done on a very ethical and emotional plane to be effective.

This is based on the cognitive and the brain sciences about how people think and act.  The premise is that people make decisions on an unconscious level on the basis of their belief systems and then figure out how to justify them with “objective information”.  Messaging is about thinking, not just language.  To get language right, you have to understand the thought it conjures up!

The moral mission of the The Little Blue Book then is: government is a design to protect and empower all citizens equally.  It draws a sharp distinction from the conservative view that democracy exists to provide citizens with the maximum liberty to pursue their self interest with little or no commitment to the interests of others.  YOYO you’re on your own!

With the use of metaphors and framing, a strategy is mapped out on how to reach people without getting into the complexity and defensiveness of issues.  The emphasis is on moral values discussions and policies come after that.  Morality beats policy so set a moral context for policy is the thesis.

In the The Little Blue Book, there is a review of how family experience can affect conservative and progressive thought.  The idea is that a strict father type family will usually promote fear and conservative thought while a nurturant and shared parenting family will encourage empathy and shared responsibility.  The basic concept is that we first experience the idea of government from our family and how it is “governed”.

Stories and illustration that explain how you come by your moral values carry great weight.  The Public is explained as the means to carry out the care that citizen’s show for one another through the use of public resources.

At the end of several chapters the authors make a list of statements that both sum up the chapter and become useful lines to use in discussion.  At the end of the chapter on The Public you find, “No one makes it his or her own without the Public!”, for example.

Privatization and corporate control are dealt with in surprisingly simple and easy to understand language that helps to show how they are in competition with progressive philosophy.  Freedom is also explained on the basis of security and that progressive need to emphasize freedom as one of their core values.

At the end of The Little Blue Book there is a short discussion on policies such as taxation (revenue?), the American Dream (American Ideal!), health care (Not ACA but The American Plan!),entitlements ( Deferred Pay!), the “free market”( the 1 percent market!), the social contract and other loaded concepts.

This is a useful, day to day, hand book to keep your thinking focused.  It should help you with your discussions especially with your crazy Rush Limbaugh quoting neighbor!

So if you want to confirm your suspicions that you are on the right track yourself, look no further than the The Little Blue Book. If you want to know how the mind works in the realm of politics (and let’s face it, we are all politicians in some way!) This is the book for you.  The Little Blue Book is well written; very concise (less than 140 pages!) and it will make you feel more confident in your discussions.  I recommend it highly!

Neuropolitician.com is a new blog in Eastern Washington, and it will not shy away from controversy.